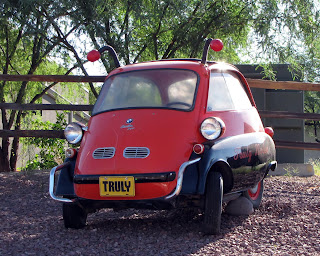 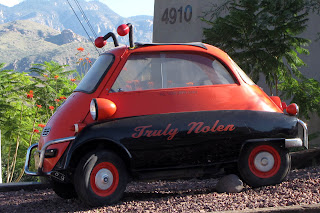 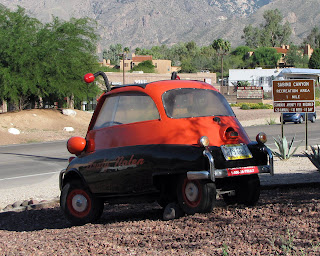 I don't usually pay much attention to cars, but this little red one parked on Sabino Canyon Road caught my eye. The car has antennae to make it look like a bug as an advertisement for a pest control service. On the front it says BMW Isetta 300. Isetta microcars were made in the late 1950's to early 1960's. Some nicknames for these little cars have been: "Rolling Egg" or "Coffin on Wheels" in Germany, "Yogurt Pot" in France, "Soccer ball of a Truck" in Brazil, "Little Egg" in Chili.

For more Ruby Tuesday posts featuring the color red, visit MaryT at Work of the Poet.
Posted by Diane AZ at 12:20:00 PM

That is a cute little red car!

Wonder who drives a car like that one - does he/she have a little bug hat to match the car? :-)

Cool car, desert colors! This is a real bug not the Volkswagen car that was called a "Beetle" and "Bug." Happy Ruby Tuesday!

oh it's so cute! wonder how it feels to drive a car like that:) for sure, it would attract lots of attention.

Diane, what a cute car. I wonder how fast it will go. The bug antennae is cool too. Happy Ruby Tuesday to you.

u may view mine if u have time

How cute. When we lived in Orlando, they had yellow VW bugs and a few small pick up trucks painted to look like bugs (Truly Nolan as well). I would never see them when I could get a photo, so one day we found the office and I had fun in the parking lot (my daughter collects photos of VWs!)

Like you, I rarely notice cars. But this one? For sure I'd take a photo of it. It's GREAT!

Cute! But no way would I take to the highway in that!

Thaks for the sharing, but I'll feel very upset if my car is nicknamed "coffin on wheels".

It's an adorable "bug" car which looks like it should have a windup key in the back.

An Isetta looks like an egg, therein lies its charm. The style is endearing, although I would not be so comfortable cruising down I-10 alongside the semis. But, at slow speed in town, the stares of the crowd would give the driver more than enough attention. Shy or reserved persons should not drive one of these...

That is a cute red car. I rember the Truly Nolen cars they always stood out. HRT

I would be tempted to wait and see who drives away in it...I love your different perspectives! This is a fun post!

I wouldn't mind driving that around hehehe, cute!

Come and see what I have got in my page for Ruby Tuesday.N

Oh they are cute!! I have always loved Volkswagen because of their beetles. But this bug for a car. I like!!! =)

My entry is here.

Very cute. Who knew such small cars were used so long ago. Now we have the "smart car." I got to ride in one last month.

Looks like a beetle and have an interesting shape. Nice capture.

That is just too cute Diane!! It is what I should drive. :)

That has to be the dutest car I have ever seen. And red too. What more could a girl want?

That is so cute, I love the antennae which make it look even buggier!

Sabino Canyon?!!!!! Why it's like coming home! I lived in Tucson for over a decade....and I loved walking in the canyon. Wow....I can't believe this...small, small world.


My Ruby Tuesday is big huge LIPS this morning...come by if you can?

How cute, it reminds me of a ladybug!
Sunny :)

It's so cute! What a great little car! Wonder what kind of mileage it gets.

Great RUBY find! I've never seen a car like this before. It does resemble a cute bug. Thanks for sharing and for visiting mine ;-)
Hugs and blessings,

What a cute little car Diane! And the antennae make the car!!

Real Men might not use the word, but I'm gonna say it anyway:

I love it! It's even cuter than my little smart car!

so cute and cool! if i see it myself, i surely take photos of it too. ;)

So cute, the antenna really fits!
The smart car that came in last year is not that much bigger is it?

Cute, in deed, hard to miss.

Wow! Wow! Blow me down. this is so cute!

That looks so cute, but not much room to stretch one's legs I guess!