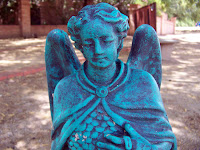 A roadside memorial marks the site where someone died suddenly away from home.

In the United States, the tradition of placing crosses, also known as descansos, seems to have originated with early Hispanic settlers in the southwestern states. Descanso is from the Spanish verb descansar "to (have a) rest."

According to Wikipedia, decades ago Arizona State Highway Patrol would place white crosses at sites of fatal car accidents to encourage safe driving. Now it is usually family or friends of the victims who put up and maintain these markers off to the sides of roads in honor of their loved ones. Roadside memorials are found in many states but are banned in Colorado, Massachusetts and Wisconsin. They are allowed in California for a fee of $1000.

This memorial sculpture on Sabino Canyon Road near Cloud Road is for two 17 year old males who died late one night when the car they were traveling in crashed into a tree in the landscaped median. This part of the tribute is near the bus bench on the side of the road. 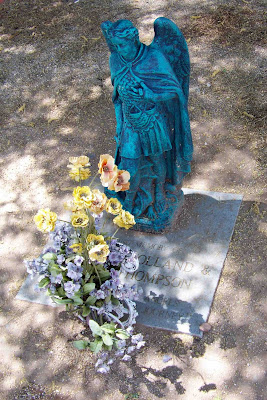 And these rusted metal crosses and small tile shrine mark the place in the middle of the road where the teens died. 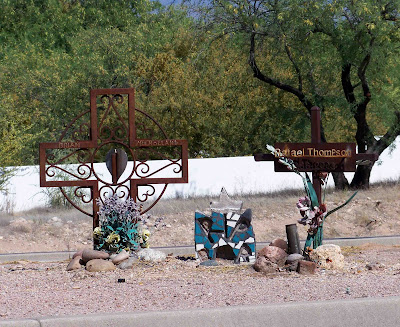 This blue cross on Sunrise Drive west of Sabino Canyon stands at the site where an 18 year old motorcyclist was killed. Candles and a yellow glass rose are among the objects found here. 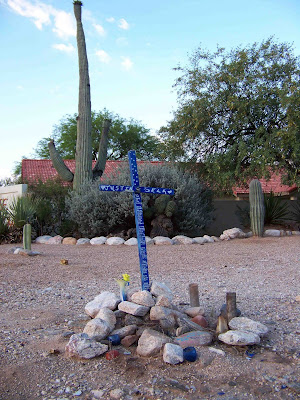 If you click on the picture below, you can read some of the sentiments painted on the cross. 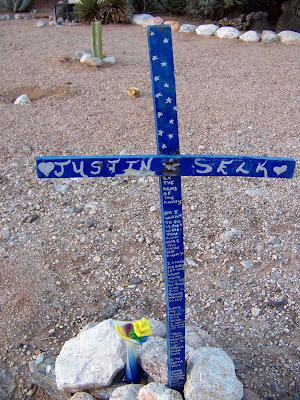 The following one located on Sabino Canyon Road south of Sunrise Drive is "close to home" literally and figuratively. The memorial is at the base of the nearest telephone pole. 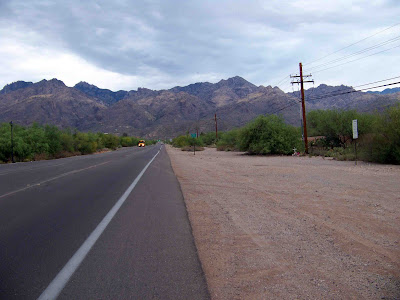 A 50 year old woman (my age) was walking her dog early one morning on the dirt shoulder of the road, when they were both struck by a car driven by a drunk driver. 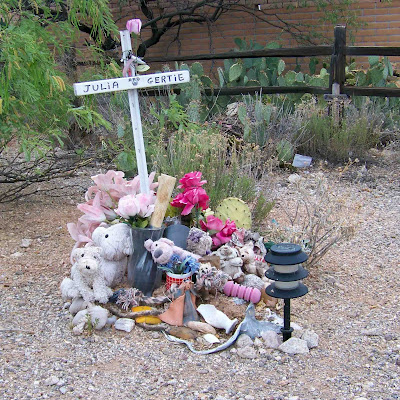 Dog toys and bones, silk flowers, a clay angel sculpture and a rolled up newspaper are among the mementos placed at the site. 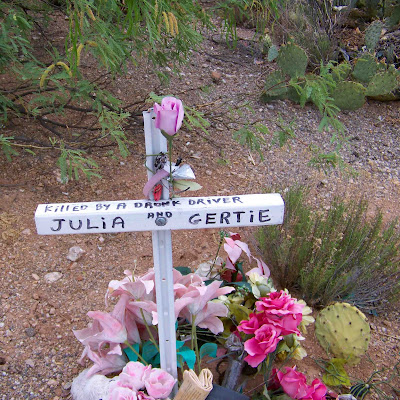 Roadside crosses are not without controversy. Some say that they are Christian and therefore violate the separation of church and state. Others point out that they are not religious statements but rather vernacular traditions to honor the dead. I find them fascinating and touching, and feel that they help raise awareness about road safety.
Posted by Diane AZ at 10:27:00 AM

Sometimes these roadside memorials have a huge impact on the drivers viewing them as they pass.
It just might save a life if they stop to think about the speeds at which they are traveling...

We have a lot of roadside memorials in our area, and it's so sad that most are for young people. I hope people do check their speed when they see them.
Sunny :)

Diane, this is an interesting post. Sad in a way but your sentiment in your writing had me really think about those memorial that I saw on the road!

i see a lot of memorials here too, and you are very correct Diane, seeing them on the road raise awareness about road safety.

It's so sad to see these type of memorials at the side of the road. We have loads of them here but, sadly, it doesn't seem to help raise awareness for better driving.

What an interesting subject! Since it's 9-11 today, I thought where does one draw the line with separating church and state?? The memorials to commemorate that day (I don't think) are seen that way.