At the canyon, weeks after the brittlebushes, palo verdes and cacti have finished blooming, the agave flowers begin to open. 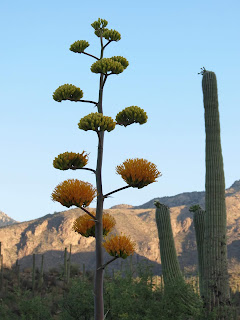 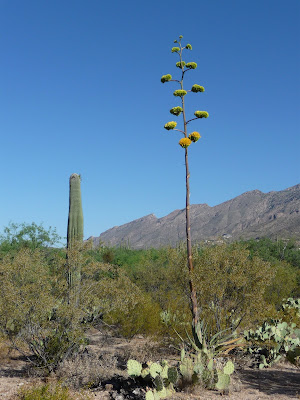 After flowering, the mother plant dies. Offshoots of the agave can continue to grow and eventually bloom. 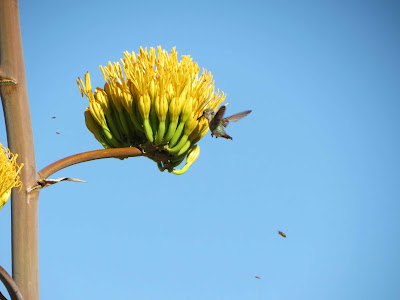 I used to have two huge Agaves out my backyard. They were living sculpture. One bloomed and I thought I still have one more. Well that one bloomed but by that time the baby was big. I was happy but now she is blooming and I miss them all very much.
Mine is still in bud but soon it will be in flower.
Your photos are wonderful.
parsnip

did not know that agaves bloomed. We have a huge on in our back yard and it hasn't flowered yet. Maybe it's not old enough.

We kept an agave "trunk" from a friend's backyard and now it stands in our entry way against a wall.

Stranger in a Strange Land said...

Nice photos of thee Agave and flowers. Nice to see the beauty of the desert in contrast to my everyday water rich, green northern forest environment.

What a wonderful plant. I love your desert flowers. I see a real beauty in the desert for so many reasons.

What a beautiful plant !!
Greetings

I look forward to seeing the desert again one day. A beautiful series of photos.